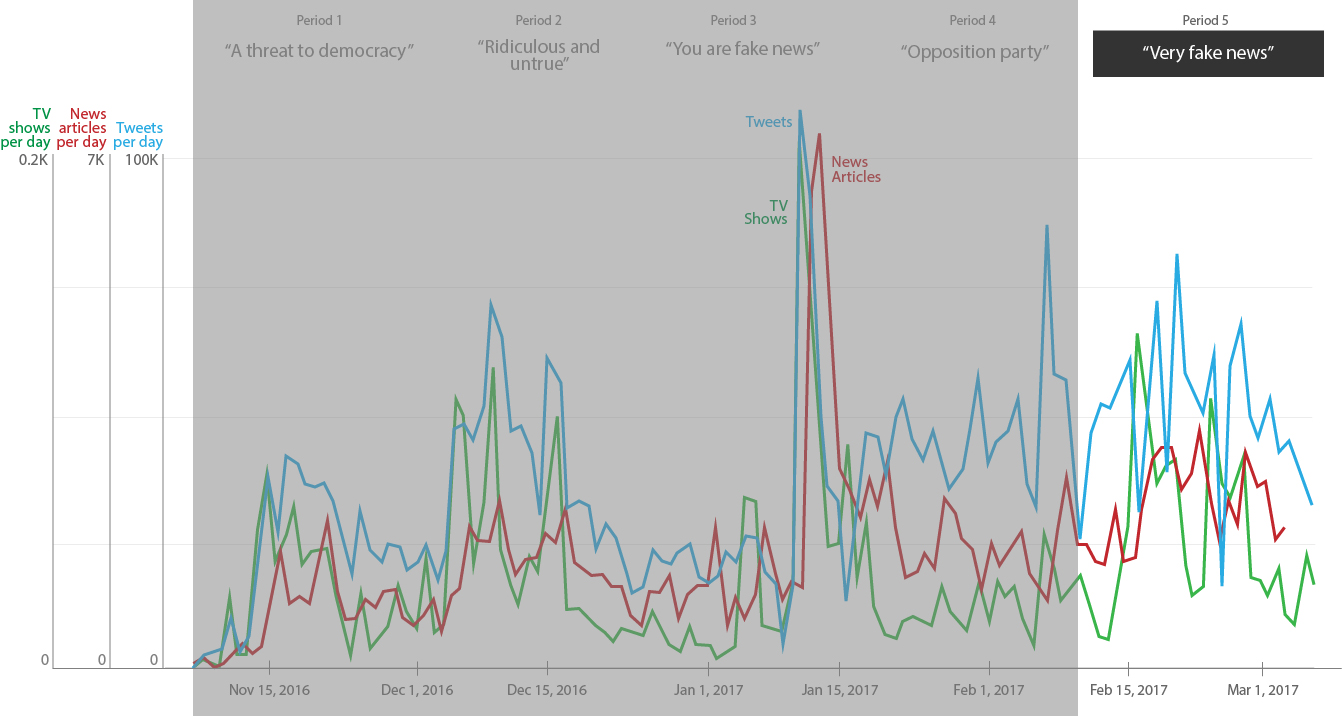 “The Leaks are Real, the News is Fake”

Period five is marked by a peak of the term “fake news” as it relates to a press conference on February 16th, in which ABC News’ Jonathan Karl asked Donald Trump if he could definitively state that his campaign did not collude with Russia. His answer, that “the leaks are real, the news is fake,” allowed “fakenews” and “#fakenews” shows an uptick on Twitter after several weeks of stagnation as shown at the tail end of period four immediately after the inauguration. The term “fake news” was also prominent on TV news stations along with the words “Trump” and “President.” The term is also buoyed by the 24-hour news cycle as CNN, MSNBC and Fox News show the highest mentions of “fake news.” The print news media is shown to be preoccupied with Donald Trump’s press conference as well. The topics “United States,” “Donald Trump,” and “US Presidential Candidates, 2016,” are also the top three most frequent topics in print media.

Period five is also significant after Donald Trump parrots a Fox News report of rising crime rates in Sweden. The story, reported on Tucker Carlson Tonight and on The O’Reilly Factor on Fox News, featured a Swedish national security official who proved to be unknown to the Swedish government. The claim that crime was rising due to an influx of Muslim refugees, made its way to a Donald Trump rally when he cited it in a speech to his supporters on February 20th. The event barely registers in the on cable news or on TV; however, it showed a spike from 0.02 to 0.90 in our Lexis Nexis data, suggesting that print media covered the topic. “#fakenews” did show a spike during this time, while “Donald Trump” was heavily discussed on television news.

The Oscars, which took place on February 28th, also registered in our relating to “fake news” and concerning the event, when the film La La Land was mistakenly announced as the winner of Best Picture instead of the, eventual winner Moonlight. “Oscars” shows a spike with “fakenews” that night. Period five is an important space from which to end these periods because, what began as a political term until this point has devolved into satire and fodder for comedy.