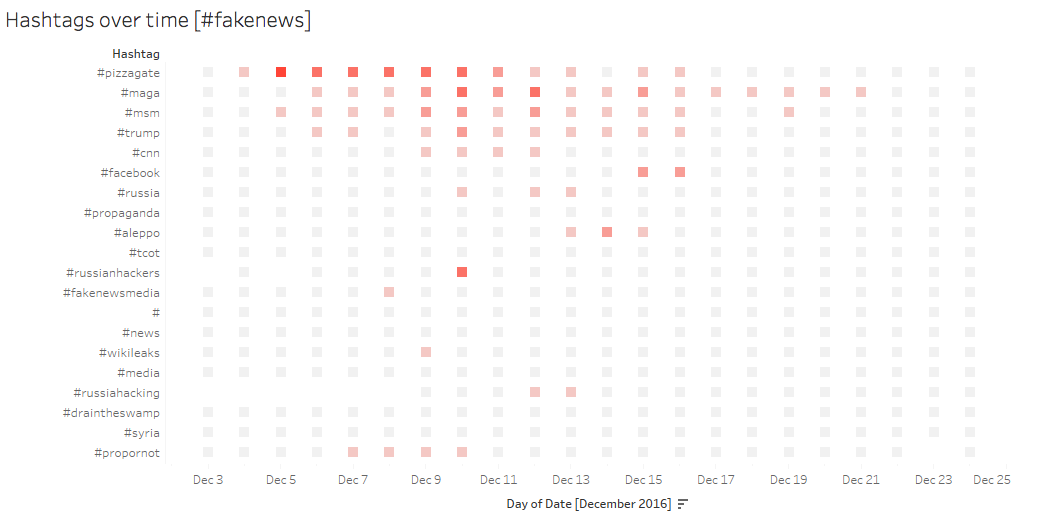 The second period of our analysis (mid-December) is higher in overall volume of “fake news” articles, TV shows, and tweets than the first period, but still second lowest overall. This period is dominated by stories that spread rapidly and are deemed “fake news” by various sources, most prominently Pizzagate and investigations into Russian influence in the election. For this reason, we have titled it “ridiculous and untrue” to reflect contestations over the accuracy of these sensational and viral stories.

Notably, this period is the first time that Donald Trump uses the term “fake news” in a tweet, specifically to rebut the claim that he would work on The Apprentice while serving as President.

On December 4, 2016, Edgar Maddison Welch arrived at Comet Ping Pong, a pizza parlor in Northwest D.C. carrying an assault riffle and firing shots. According to the Washington Post, “the man told police he had come to the restaurant to ‘self-investigate’ a false election-related conspiracy theory involving Hillary Clinton that spread online during her presidential campaign.” A months-long Reddit conspiracy came to light, which revolved around the belief that the Clintons were running a a child sex ring from the back room of the restaurant. The day after the shooting, the hashtag “#pizzagate” became the number one trending hashtag across both “#fakenews” and “fake news” tweets.

In addition to Twitter, TV news mentions of “fake news” also peak around December 5–6, and “Hillary Clinton” (#7) and “restaurants” (#21) appear in most popular topics in Lexis Nexis news sources around this time. Other “fake news”
articles remain focused on the 2016 election, internet social networking, and Facebook, consistent with the first period.

Investigations into Russian influence in the election

On December 9, The Washington Post reports that a secret CIA assessment concluded that Russia intervened in the 2016 election with the explicit aim of helping Trump win the presidency. That same day day, President Obama directs the intelligence community to conduct a review of what happened during the election, and Trump’s transition team responds by claiming “The election ended a long time ago in one of the biggest Electoral College victories in history. It’s now time to move on and ‘Make America Great Again.’” The following day, Donald Trump tweets about “fake news” for the first time.

Concerns regarding the Russian influence on the election can be seen in the topics assigned to news articles by LexisNexis. Within the top twenty-five topics from this period, LexisNexis has identified “us presidential candidates 2016” (#3), “campaigns & elections” (#6),  “elections” (#8), “us presidential elections” (#10), “heads of government elections” (#11), “investigations”(18), and “russian federation” (#22). Of particular interest are “investigations” and “russian federation”, which had previously not been so popular. Traditional news media therefore appear to report more on potential Russian influence and the investigations into this possibility than in the previous period, which focused more on social media, technology, and the immediate aftermath of the election.