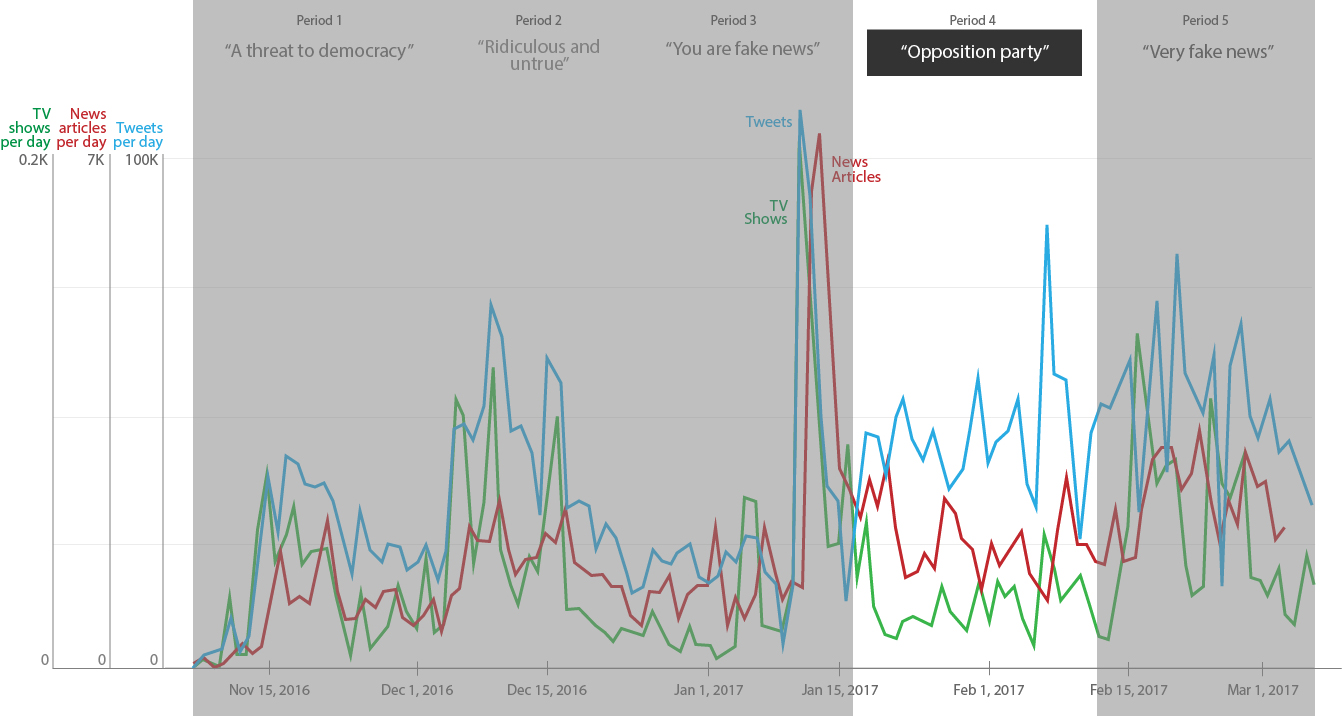 Fairly significant differences in the prevalence of the term “fake news” appear in the the mid-January to early-February time period. While in the preceding periods the usage of the term is proportionally quite similar across all three datasets, in period four we begin to see a bit of separation between the relative frequency of the use of the term.

Major events associated with the term “fake news” during this time period are:

Two terms become associated in the discourse of fake news within this period, “alternative facts” and “opposition party,” as seen in the data sources. These new terminologies, particularly “alternative facts”, act as a sort of counter to the extant use of the term “fake news’.

“Altern” over time in LexisNexis

Following the president’s accusation of CNN and Buzzfeed in the previous period, these new phrases perhaps act as a sort of stand-in for the term “fake news” by the Trump administration. Steve Bannon calls the media an “opposition party”, claiming that they “don’t understand this country”. Kellyanne Conway uses the phrase “alternative facts” to excuse Sean Spicer’s exaggerated comments about attendance at the Trump inauguration. Alternatively, the public utilizes this phrase in regards to her comments about the nonexistent “Bowling Green Massacre”.

The Monday following the inauguration and “alternative facts” interview, social media exploded with reports that the official Badlands National Park Twitter account had been ordered to delete tweets advocating climate change facts. The park’s tweets were widely understood as a critique on climate change-denying members of the Trump Administration, and several self-described “alternate” National Parks Service accounts popped up following public outcry over the deletion. The most retweeted and favorited single tweet in our entire “Fake News” Twitter data comes from one such account, @AltNatParkSer (since renamed @NotAltWorld):

The reach of this tweet reflects a key moment in the spread of “resistant” discourse across Twitter.

On January 27th, President Trump signed the Executive Order “Protecting the Nation from Foreign Terrorist Entry into the United States”, otherwise known as the Muslim Ban. Immediately, the hashtag “#muslimban” becomes the most used hashtag from January 28 through January 30th (in tweets that also contain the phrase “fake news”). Other such anti-administration terms, such as  “#resist”, also increase in real-time response to activities by and against the administration.