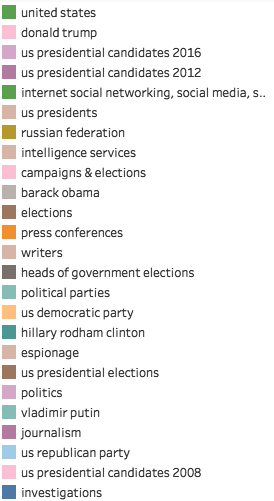 In the third period, we begin to see the term “fake news” being used in an accusatory manner. Politicians and other influencers start to blame specific outlets for false coverage, turning it from a warning label to an insult.

This period also contains the highest number of tweets, articles, and news segments talking about “fake news,” with a peak around January 11.

There were three major trends in this period that correspond with events happening around this time.

As his tenure as president came to its conclusion, President Obama was mentioned frequently in this period by traditional news outlets. This is especially the case in LexisNexis, which has “barack obama” as the #10 topic for this period. During this period is the only time he breaches the top ten topics in LexisNexis. In TV archive, Obama is the second most mentioned topic (after Donald Trump) during the last weeks of December.

This increase in discussion of Obama appears to relate to Obama’s departure from the White House. In the days before the inauguration, Obama and his family became the target of many news articles about “fake news.” In particular, articles from LexisNexis appear to debunking several of the “fake news” stories related to Obama.

These outlets also considered the legacy of Obama and how his administration affected the development of “fake news.”

A major event of this period was the release of the Russian dossier on Trump. On January 10, media outlets began reporting the existence of a document that had unverified allegations of misconduct and ties between Donald Trump, then president-elect, and the Russian government. Agencies were concerned that the Russian government would be able to blackmail Trump using the information in this document, including sexual and financial misconduct. The following day, Buzzfeed published the dossier despite the fact that it had yet to be verified.

In traditional media outlets, Russia and terms related to the dossier became important topics in this period.

For instance, in TV Archive, Russia becomes a prominent topic of discussion during this period. This is particularly true around January 11, when Buzzfeed released the full document. Donald Trump likewise increases his lead as the top topic in TV Archive in this period.

LexisNexis also sees an increase in several topics related to the Russian dossier around January 11 and 12. “Intelligence services” is at the number 7 spot, followed by “espionage” at number 8. Meanwhile, “putin” is at number 21 and “investigations” is number 25.

New forms of media, on the other hand, do not seem to report as much on the dossier. Twitter sees no spike in the mentions of Russia at this time.

The final trend seen in this data relates to Donald Trump’s first news conference after being elected as president, which was held on January 11. Donald Trump addresses the Russian dossier and other concerns at this event. The then-President Elect says to CNN’s Jim Acosta’s request for a question:

“Not you, not you. Your organization is terrible… I’m not going to give you a question. You are fake news.”

He also states about Buzzfeed:

“It’s a disgrace that that information that was false and fake and never happened got released to the public. As far as Buzzfeed, which is a failing pile of garbage, writing it? I think they’re going to suffer the consequences, they already are.”

Around the time of the news conference, CNN sees a spike in its mentions. On Twitter, “fake news” mentions of CNN proliferate, with their numbers being slightly above Trump at this time, who in turn becomes a prominent source of tweets about “fake news.” This period also sees an increase in “fake news” retweets and favorites, with the total number of each peaking at this time.

In terms of hashtags, we begin to see an increase in the usage of #trump and #cnn (especially on January 11). Mentions also go up for @cnn and @realdonaldtrump, in addition to the increased mentions of @buzzfeed noted above.

The articles LexisNexis, alternatively, do not focus on the press conference or CNN specifically at this time. Although there is an increase for topics related to the dossier which Donald Trump was referencing, very few seem to relate specifically to this event. In fact, the only topic that does directly relate is “press conferences,” which is barely talked about at all until January 11 and peaks on January 12. These findings reflect the ways in which LexisNexis reports its data: only broad topics get mentioned (with few, if any, specific outlets) and its reporting typically comes a day later than the other sources.