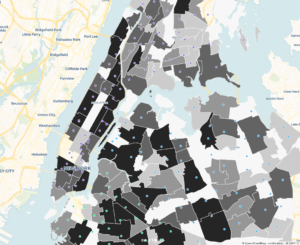 There are a lot of things New York City is known for, bagels, cheesecake, their libraries. With over 90 branches NYC has libraries for all different parts of New York. This study, however, plans to look at how these location are spread out across NYC and if the population of these areas affect the placement of these branches.

In order to create the maped graph shown below the following tools were utilized: Link to the Map

The overlay of the map is a scatter plot of where the libraries in NYC are located. Each plot is a different color depending on which branch the belong to such as Queens Library or New York Public Library. When clicking on a location it allows the user to see what branch of the library it is as well as a link to the branch’s homepage.

While the data did not provide the information i had guessed it would should, it did provide some answers to how the public libraries in NYC are laid out. Though I had expected to see more of a cluster near higher populated areas, it appeared most of the library system was evenly spread out among the neighborhoods.

Using Carto was surprisingly an easy process once the data was found. The most difficult part is using this program was not being able to find data in the correct format. Though once that data was found it was easy to join the two together.

The post Libraries Across NYC appeared first on Information Visualization.