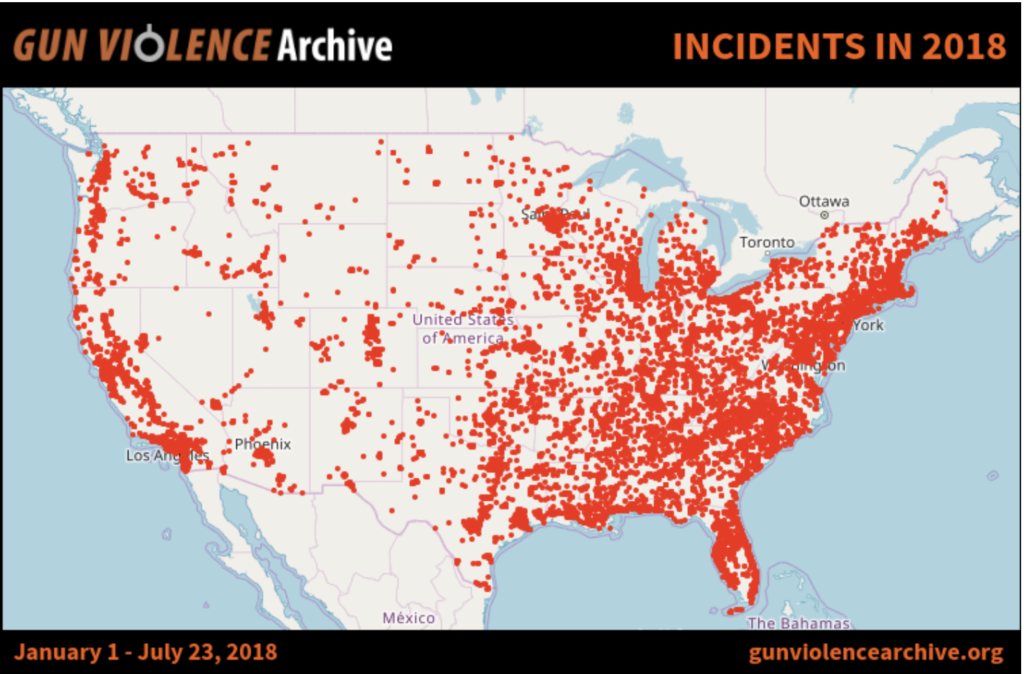 The Price of Freedom: Gun Violence and Children

“This is the price of freedom.  Violent nuts are allowed to roam free until they do damage, no matter how threatening they are.”

A quote from Bill O’Reilly’s Blog, No Spin News, regarding the mass murder in Las Vegas at the Mandalay Bay hotel in the Fall of 2017.  This quote, unfortunately, clearly states that innocent lives are lost due to lack of gun control.  I do not agree with his use of the word freedom, it is more like anarchy, but we get the gist.  Hearing this quote I had a desire to map out this cost. Focusing on the most innocent, I mapped out the gun deaths and injuries of children under the age of 12. I started by looking at a possible correlation between overall rates of death for each state. I then began looking into connections between domestic violence and gun violence.

Data Collection
Using data from the Guardian regarding gun crimes and death in the United States, I pulled the rate of deaths for each state.  I then found data on deaths and injuries of children under 12 from the Gun Violence Archive.  In order to get a geolocation from this dataset, I needed to bring the data into OpenRefine to combine columns into a format that could be used with google sheets services.
Data Visualization
The data for states from the Guardian file easily over the shapefile from the U.S. Census site. I used light and dark on each state to show higher or lower death rate.  The locations of deaths and injuries are shown with a marker.  The size of the marker indicates the number of deaths.
Tools
Carto
Google Sheets
OpenRefine
Geocoding
Sources
Census.gov
Gun Violence Archive
Guardian, Gun Death Rates by State
References
Mass Murder in Las Vegas
DomesticShelters.org
Everytown for Gun Safety

I would have liked to have spent more time gathering and working with the data.  Most resources only gave parts of a full data-set and normalizing the data was challenging.  Also, some data simply did not exist. Not all states report the same, or any, data on gun violence or domestic abuse.  It is an interesting subject that deserves more attention.  Most news coverage is focused on mass shootings like the one in Newtown, CT, but the same number of children under 12 are killed every two months in the US.

The post The Price of Freedom: Gun Violence and Children appeared first on Information Visualization.