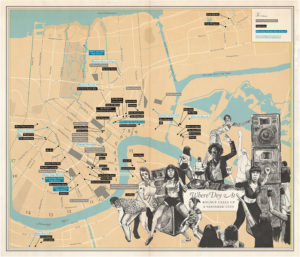 New Orleans—a city located in the Deep South nestled in a crescent bend in the Mississippi River—has a rich cultural history. Despite sub-tropical climate, and the guarantee of biblical weather, it remains a place of resiliency, love, and hope. Indeed, New Orleans is my hometown and, although a New Yorker now, I am forever shaped by my upbringing in the “Crescent City.” Growing up, I was fortunate enough to live in the French Quarter, first in the historic Pontabla Building on Jackson Square and later above my parent’s restaurant on Conti Street. Because of my proximity to the city’s center, I developed a keen familiarity with food, hospitality, and service and felt the rhythms and beats of New Orleans on a daily basis. I was habitually and freely exposed to wide array of people, ideas, and, most importantly, the rituals of New Orleans. Well into adulthood, for example, I witnessed the cultural importance of the Carnival season, or Mardi Gras, and over time was able to fully grasp its cyclical and liturgical (if not Bakhtinian) necessity. Unknown to many tourists, the carnivalesque festivities that take place across the city are often planned through community-based organizations—parade Krewes and Social Aid and Pleasure Clubs—that spend their year (and their money) preparing for the Carnival season. My first map, a map of Mardi Gras, illuminates some of the spatial aspect of parade routes and, perhaps more importantly, connect parades routes with Social Aid and Pleasure Club routes and locations, historic districts, and neighborhoods. New Orleans, of course, is more than just Mardi Gras. It is also home to a rich and vibrant cultural scene all its own. Books (new, used, and antiquarian), art galleries, gardens that teach the virtues of healthy food and composting, and its spaces of memory and community (cemeteries) provide places for New Orleanians to meet, share, and enjoy the city. To highlight this aspect of the city, I have created a cultural map of New Orleans, which locates local bookstores, urban gardens, art galleries, and (best of all) the city’s historic cemeteries.

My inspiration for my maps comes from Rebecca Solnit and Rebecca Snedeker’s Unfathomable City: A New Orleans Atlas (2013), a book I recently pickup up at Octavia Books, an independent bookstore in uptown New Orleans. The book features 22 maps accompanied by essays written by “geographers, scholars of sugar and bananas, the city’s remarkable musicians, prison activists, environmentalists, Arab and Native voices, and local experts, as well as the coauthors’ compelling contributions.” The maps and essays included are inventive and often present the nuances and contradictions of New Orleans, a city both culturally rich and mired by crime, corruption, and environmental tragedies, including Hurricane Katrina and the BP oil spill. I began my research with a data & statistics LibGuide from Tulane University. The LibGuide helped me find Louisiana State and local data, which led me to DataDriven, a catalog of public datasets produced by the City of New Orleans. In this catalog, I was able to find many open datasets on both cultural and municipal topics. I then started to collect datasets that made sense together (i.e. parade routes, Mardi Gras first aid and recycling stations, portable public toilet locations) for each of my maps. I then used the City of New Orleans GIS website to find shapefiles of the Historic Districts and Cultural Products Districts of New Orleans and the Arc GIS website to find shapefiles of all the waterways in Louisiana, including the Mississippi River. I needed to refine some of the data because it often included two variables in one cell, which I separated or deleted. I then layered these datasets in Carto and refined as necessary.

My New Orleans cultural map uses a base-map of the city’s Historic Districts (light brown layer) and overlays it with the Cultural Products Districts (dark brown), which plots bookstores, galleries, museums, and urban gardens. Quite clearly, most of the mapped locations fall within a historic district and there is a high density of dots in the Vieux Carré or French Quarter (a.k.a. “the Quarter”) and the Central Business District (CBD) near the Convention Center. The urban gardens, located in charter schools or community plots where children and community members learn about food, waste, and pollinators, are scattered in the neighborhood and residential areas outside the city’s center. Bookstores, such as Blue Cyprus Books, Beckham’s Book Shop, and Octavia Books, are located in the Quarter as well as Uptown near Magazine and the Garden District. In my Mardi Gras Map, the parade routes all fall within the historic districts. It is notable that many of the Social Aid and Pleasure Clubs routes fall outside it. The Social Aid and Pleasure Clubs are some of the oldest and most prestigious participants in Mardi Gras. Their routes fall outside the historic districts and, instead, stay within the home districts of the clubs. Further, many of these clubs do not conform to the normal Mardi Gras parade schedule, which means that it is predominately only the immediate community who is their intended audience (though others can, and do, attend). These districts are in predominately poor areas, including the Lower Ninth Ward, many of which were the hardest hit areas during Hurricane Katrina. The location of these routes outside the historic, predominately white, districts along with their idiosyncratic schedules allows poor communities to assert their own autonomy and identity within the larger social frame of Mardi Gras. Although not nearly as robust as New York, I was surprised how much publicly available data the City of New Orleans has available. I enjoyed working with data from Louisiana and would like to explore more of it, including aspects of education and crime in Orleans Parish. I though Carto was intuitive and easy-to-use. Since many shapefiles come “ready” I would like to explore what exactly everything does in the zip files, how it is created, etc.