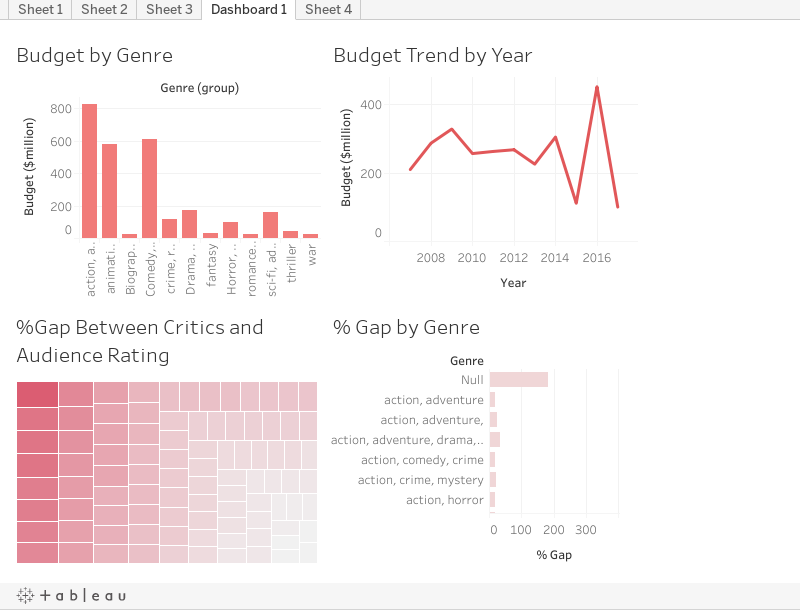 These graphs were created to show several trends in the highest critically rated movies in between 2007 and 2017. The four trends display the increase of budget by the genre of movie, the budget change over the decade, the percentage gap between critic rating and audience rating, and that same percentage gap organized by genre. I was interested mostly in the percentage gap between critics and audience rating, driven by purely selfish curiosity. Rotten Tomatoes has pointed me in the wrong direction many times. I was curious to find the budget differences in movies that were a hit among critics, as well as the difference in genre.

These graphs were made using Tableau Public as well as google sheets. The data was found at informationisbeautiful.net and was accumulated from Rotten Tomatoes.

The first thing I did was attempt to find a dataset that would interest me. This proved to be difficult, and I tried a large number of datasets in Tableau Public before finding Movies Critics Love, but Audiences Really Didn’t. This dataset came in the form of a google sheet, which I then downloaded as an Excel Doc. and loaded into Tableau. With that I played around with what kind of data visuals I could create. In the beginning I had wanted to make a heat map, as I was largely inspired by the data visual created by Thomas Yang that is interactive and shows info about Amazon movie reviews. In the end, I couldn’t create a heat map, but I could create a tree map which turned out very well. I then played with the data to create groups for each genre, and make two bar graphs and a line graph.

Tableau Public is a slightly difficult program to use, but its versatility is worth it. Once you have figured out how to use the program, which you can do through tutorials on its website, you can make a lot of highly customizable data visualizations. I think the most difficult part of using Tableau is getting the data set to upload correctly that functions in the program. In the future, this is something I would like to play around with. I was moderately shocked at the information in the graphs I made, as I would have expected a drop in the budget for movies around 2008 and the large drop in 2015 and 2017 seemed odd. The large percent gap between audience and critics ratings for comedy movies made sense to me as people have varying senses of humor, as well as the highest budget going towards action movies. As for the treemap, looking at the percentage gap for movies that critics and audiences didn’t agree on I realized I had not seen most of the movies on the list, but was happy to see The Last Jedi present at a 36% gap. At least that made sense to me.