Watching movies has been a crucial way for my entertainment. It helps me relax when I’m stressed out and it enriches my life when I’m bored.

Recently, I was running short of movies and dramas to watch but I wasn’t sure which steaming platform I should choose to explore movies and dramas on. It inspired me to investigate and visualize data about movies on streaming platforms for this project. Moreover, I almost always take look at the rating score of the movies before I watch them. Thus, in this project, I’m also curious to find out how the rating systems differ from one another.

I listed the following research questions to direct me for this project:

To create the dashboard, I found a dataset on Kaggle about Movies on Netflix, Prime Video, Hulu, and Disney+ and their corresponding ratings from IMDb and Rotten Tomatoes. The dataset is a CSV file.

The initial fields include the following dimensions:

Using the data that was tidied up, I used RStudio to first calculate the data needed, including average ratings by year “df_avgIMDb_byYear” and “df_RT_byYear”. Then, to find out the answers for the four research questions, I used “ggplot” to create six images of graphs that examine the number of movies by genre, distribution of movies in streaming platforms by age, and compares the two rating systems by platforms and by year.

As R Studio has a very steep learning curve, I have encountered many difficulties in the process.

In this section, I will analyze and discuss the graphs I created with R.

Based on the graphs, we can tell that Prime Video, Netflix, and Hulu are mainly targeting adults and young adults. Not surprisingly, Disney+ provides the highest amount of movies that can be watched by all age groups, making it a friendly platform for kids.

3. Rotten Tomatoes has a slightly higher average score for movie ratings, making IMDb the harsher one

The two graphs above show the distribution of movie ratings in the four streaming platforms rated by IMDb and Rotten Tomatoes. On IMDb, all films are given an overall rating out of ten. The ratings are derived from votes submitted by IMDb users, not movie critics. Differently, Rotten Tomatoes gives films a score out of 100 based on the average reviews of professional film critics. Here, to make the ratings consistent and easy to compare, all ratings are converted into a percentage setting so that they are all out of 100.

To make it obvious what graphs are for which rating system, I used gold color for IMDb rating since it is IMDb’s logo color, and I used tomato color for Rotten Tomatoes rating so that readers can differentiate the two rating platforms at the first sight.

Curious about the difference, I conducted secondary research to find out the potential factors.  According to Global News, one crucial factor that leads to the rising score in Rotten Tomatoes may be the rating platform’s close financial ties with the movie industry. The website, launched in 1998 by three recent Berkeley grads, was purchased by Warner Bros. in 2011. And in 2016, Comcast (which also owns NBCUniversal) acquired a 70% stake through a deal that turned Rotten Tomatoes into a division of the ticket vendor Fandango. These media groups produce many of the movies and TV shows that are rated on the site. 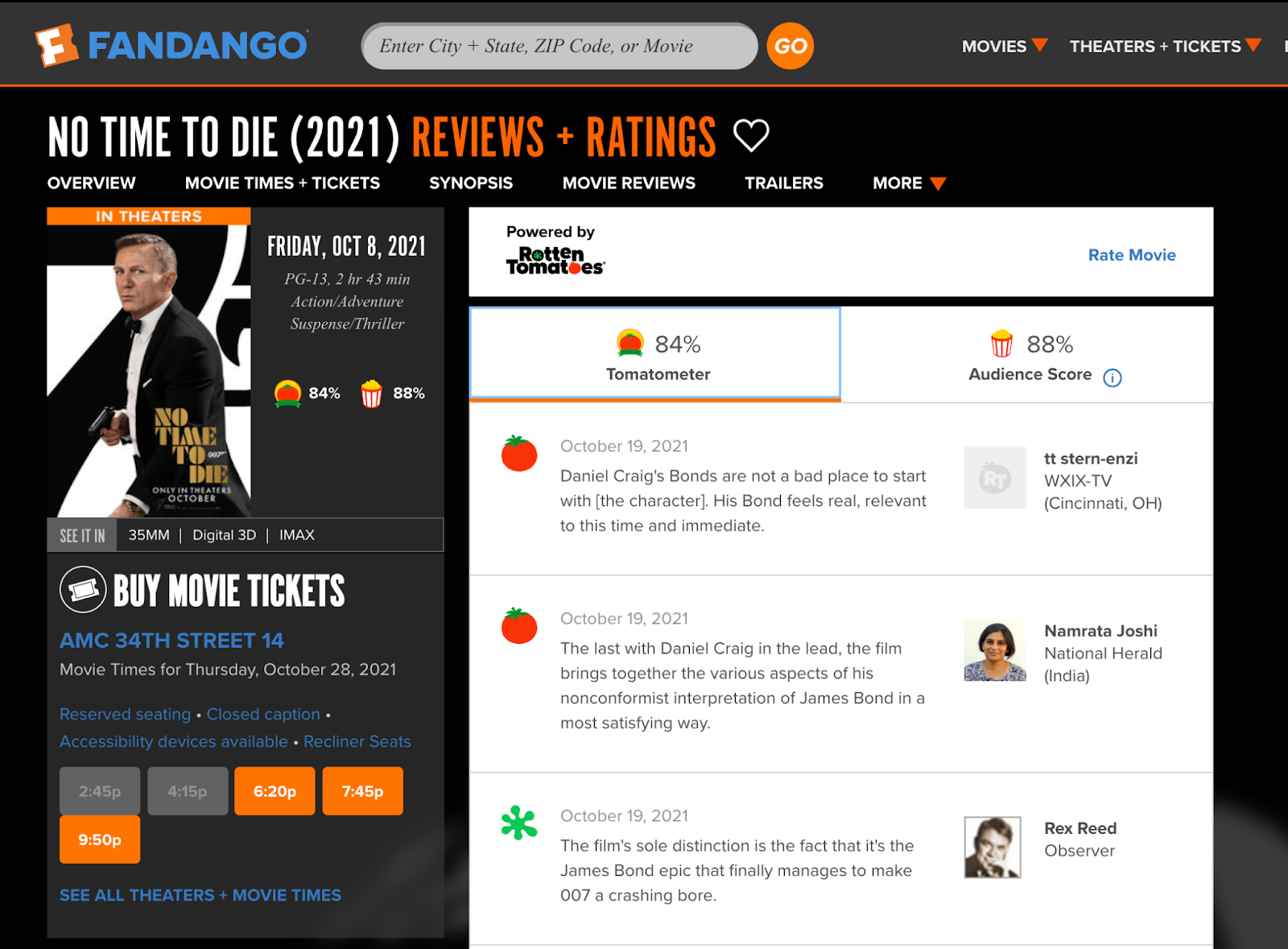 Moreover, different from IMDb raters who can be anyone, Rotten Tomatoes ratings are mainly based on professional film critics, and most of the critics are freelancers nowadays. Those critics heavily rely on studios for access to advanced press screenings, which is something tenured critics at big publications don’t need to think about. Therefore, freelancers may hesitate to pan a film out of fear of drawing the studio’s anger. As one of the freelancer critics said, “If I continuously slam, for justifiable reasons, a given series of films from a given studio, I may stop being invited by that studio.” This may have caused higher Rotten Tomatoes ratings in more recent years.

The growth of internet critics writing for specific audiences could also potentially help explain the rising Rotten Tomatoes scores. For instance, if the critic writes a review aimed at horror fans, they are most likely judging the film based on how it appeals to that specific audience, which is different from critics from 20 years ago who had to review every film that came out every weekend.

Overall, there is no doubt that higher rating scores in more recent movies can help boost the box-office records since roughly one in four moviegoers would use Rotten Tomatoes to decide if they will go see the movie. But the rising scores in Rotten Tomatoes can be confusing for viewers who use the site to decide what to watch. For example, this spring’s Godzilla vs Kong, a movie about a giant CGI ape brought out of retirement to battle a giant CGI lizard, had a score of 79/100 in the lead-up to its opening weekend (it has since dropped to 75/100). That’s a higher score than 14 best picture winners, including Forrest Gump (1994): 71/100; Gladiator (2000): 77/100; and Braveheart (1995); 78/100. In contrast, the IMDb rating for Godzilla vs Kong is 6.4/10 and it’s 8.8/10 for Forrest Gump.

However, the process of using RStudio was a bit tough for me due to its steep learning curve. As much as it is very convenient for calculations like finding the average rating score or the number of movies in a certain genre, I found it very difficult to use for cleaning data so I switched to OpenRefine and Excel. Comparing RStudio with Tableau for data visualization, Tableau is a lot easier to learn and creates simple, interactive graphics for people with no code experience. R can be confusing sometimes when installing the packages and libraries needed and figuring out the right functions to use; it can take hours to just figure out how to adjust the labels in the x-axis; it is also hard for beginners to figure out how to generate interactive charts. Yet, R is more flexible to create different forms of charts, and it is very easy and quick to upload data and update/knit charts. In sum, I would choose to use Tableau if I were to create simple, interactive information visualization, and I would use RStudio for exploratory analysis.

Though IMDb provides a relatively more useful and realistic rating score of films, particularly older movies and less well-known movies, it doesn’t mean that the ratings are absolutely fair. In my secondary research, I found that there is a lack of balance in raters’ gender in the rating platforms, which caused the rating sites to skew pretty heavily towards the opinions of men. If looking closely at the breakdown information for the movie ratings from secondary research, men consistently rate masculine films higher than films that feature female leads or more traditionally female themes. For instance, the IMDb ratings for Sex and the City show that over 29,000 men gave the film an average rating of 5.8, while 43,000 women came up with a score of 8.1. A straight-up averaging of the scores gives it a ranking of 7.4, but IMDb’s maths leaves it with a final score of 7. Thus, in the future, I’m interested in investigating how the demographics of the rating platforms may affect movie ratings.

Another thing I found interesting is how Rotten Tomatoes rank movies. For its main rankings, Rotten Tomatoes only takes into account reviews from approved critics and approved publications. Moreover, Rotten Tomatoes also weights its rankings depending on how many reviews a film has instead of simply the average rating score. In addition, not surprisingly, most of Rotten Tomatoes’ selected critics are men (78%), and 82% of reviews were written by white critics. Therefore, I’d like to explore more about various factors including critics’ background, the number of ratings, and demographics that may influence movie rankings.

At last, since the rating systems have different requirements for raters, I’m interested in building out a rating system that combines IMDb, Rotten Tomatoes, and even more rating platforms like Douban, Metacritic, and Letterboxd ratings. It would also be highly useful to show what platform the top-rated movies are released on. I believe it would save a lot of time and trouble for movie seekers.

“How Does R Compare against Tableau for Data Visualisation?” Quora, https://www.quora.com/How-does-R-compare-against-Tableau-for-data-visualisation.

“Which Movie Website Is Better: Imdb or Rotten Tomatoes? Why?” Quora, https://www.quora.com/Which-movie-website-is-better-IMDb-or-Rotten-Tomatoes-Why.