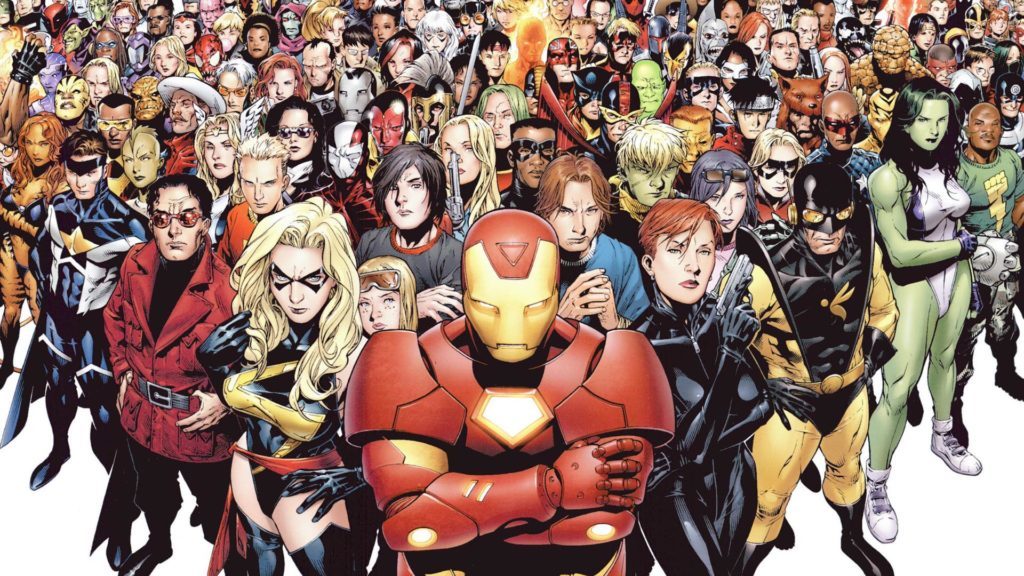 Marvel heroes are worldwide comic idols for people all around the world. With over 8,000 characters. Marvel comics started in 1939 and been generally known as Atlas Comics since the early 1950s. During past 80 years. Direct from Marvel’s lawyers, the studio has created over 8,000 characters. Blockbuster film franchises including Iron Man,The Incredible Hulk, Thor, Captain America: The First Avenger, Marvel’s The Avengers and Iron Man 3.

As a fun of Marvel, I am really curious about the social networks between these super heroes.  Take this project as a chance, I decided to visualize main edges and major connections between them.

I searched about visualization of social networks of marvel heroes and came across the graph below. This graph shows us what the significant networks looks like.

Using different color, sizes of nodes and length of edges, it indicates the closeness and centrality among main figures. In this graph, we can easily find out which figure has the most amount of connections–Captain America who followed by Spider-man, Beast and Thor.

I wanted to explore different formats to indicate their connections but keep its clarity and understand ability. I continued to explore different formats of network visualization formats, this graph above attracted my eyes. The circle format looks pretty straightforward. It clearly divides nodes into groups by differentiating the distance and color of edges. And edges are also ranked by weight to indicate the strength of connections.

1.Kaggel–The Marvel Universe Social Network data set. Kaggel is an open source platform for public to explore and publish data sets. It’s own by Google since March 2017. This data set was conducted and uploaded by Claudio Sanhueza.

I found this data set on Kaggle which is the open-source platform I used for my previous lab report. It provides loads of interesting dataset.  I searched by putting the keyword “Marvel” onto the search bar. It came out with 5 data set in total. I chose the one with “social network” in its name.  In this file, there are there csv files emphasis on different aspect separately. I chose the one called “hero-network” to upload onto Gephi.

I inspected the the data set and found it was as clean as needed. So I started to upload it into Gephi. Since I think the best form for mapping out the network among people is force-directed, so I chose ForceAtlas 2 as the initial layout, to see how it generally looked like. Unfortunately, the data set seemed too huge for Gephi–as 10471 nodes and 224127 edges in total, it caused the software shut down twice. In order to avoid same situations happen again, I tried to put filters as soon as the data was imported. I set up partition count (eccentricity) as a filter: range from 2985( ⅔ of the total 4264) to 4264. And I also set another filter “Degree Range” from 512 (3/1 of the total) to 2789. The result with this layout was not very clear(picture 3). From the final result I got, we can easily tell that spider-man has the largest amount of connection with other heroes, the next significant figure with most connections is Captain America. However, from the weight and color of edges, we can tell that connections between Thor with Mr.Fantastic, Invisible Woman with Mr. Fantastic/Thing Benjamin/Thor are most frequent connections. From doing this project, I think Gephi is a very powerful tool to analyse datasets of network, but the learning curve is steep. The interface includes lots of jargon words that take time to understand, especially it doesn’t allow users to return to last step, so you should carefully make changes, and save file incrementally.  But overall, it has a outstanding capability which save a lot of time for designers.

I would like to explore other tools in Gephi and test how it would affect the graph. I think working on connection of figures appear in different comic stories was very interesting. For the future projects, I probably will work on visualizing connections of factors that cause environmental problems for my final project.