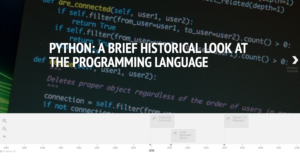 Python is a programming language that has continually increased in popularity and use since its conception in the late 1980s.  It puts emphasis on code readability, and its syntax allows programmers to express concepts in fewer lines of code than other languages that were available at the time.  Its large and comprehensive standard library, along with its dynamic type system, and automatic memory system, have led to its rise in popularity throughout the various versions.  Becoming open source shortly after its conception, its principal author, Guido van Rossum, still maintains a central role in deciding the current direction of the language alongside the rest of the Python community.

This limited historical investigation into the history of Python was inspired by my own curiosity, as I try to become a proficient programmer in it.  Even with this simple timeline, one can begin to understand how it has become one of the more important programming languages used to today in just under three decades.

Timeline.JS is a user-friendly program that uses a Google Sheets template in order to import information and automatically build a timeline.  Columns are used for information input, i.e. dates, text, media, etc., and rows represent each event or era the user wants to build into the timeline.  While there are limited design choices, the experience is straight forward and a good start for novices.  Research was conducted through a few articles that were found online in order to put together the basic historical timeline of Python.

The Timeline.JS file can be viewed HERE

The Google Sheet data can be viewed HERE

This timeline was a successful and straightforward project to begin to observe data in a spreadsheet becoming a visualization that is more captivating and understandable for its readers.  While the internal “box” of coding that was developed by Knight Lab remains opaque at best, the idea of input and output is reinforced.

While the research was extremely minimal for this timeline, it does give context to the Python language from a historical sense.  However, a deeper understanding of programming and the language itself is needed to fully appreciate what the language represents in the context of programming.  With a wider understanding on my end, there could be a more in depth look at the Python user community and how their advancements have added to the utility of Python.

Srivastav, Harri. “The Evolution of Python Language Over the Years”

“Q&A: Python Creator Guido van Rossum on How He Got His Start in Programming”