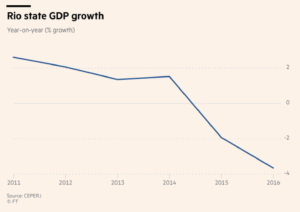 Inspired by my latest research, where I’ve contrasted the youth crime rate of some regions of New York City with the number of extracurricular activities that kids have in those areas, I decided to bring this question to my hometown: Brazil. It’s not news that the Brazilian crime rate is tremendous, and compared to NYC, I would have a lot more work to do when crossing datasets from all of the Brazilian cities. With that in mind, I decided to ask a different question this time; I want to understand how the crime rate and education effect each other, but I also wish to find if the income of the area also affects the crime rate. In other words, I want to investigate if violence is directly related to the literacy level and income in specific areas.

This research started by analyzing how the international media perceived Brazilian violence, and how could I gather enough data about this situation. I came across a very intriguing article that stated: ” The number of murders in Rio state increased 10 percent in the first six months of the year to 2,723, while deaths during confrontations with police have risen 45 percent, according to the state security secretariat. Although still lower compared with Rio in the 1990s, the murder rate is rising fast. Stray bullets from shoot-outs between police and gangs — known as ‘balas perdidas’ — are killing ever more innocents. In one recent incident, a bullet hit a pregnant mother, mortally injuring her unborn baby. In another clash, a doorman was killed by a grenade near Copacabana.” With that article, I could realize how destructive the violence in Brazil can be, and motivated me to produce meaningful research that could be used as a starting point to fight this situation. The next step was to gather the datasets; I started by crossing information about the number of criminal records of the cities with the population, with that I could take out the misleading fact a bigger community will have a more significant crime rate. After that, the goal was to bring useful information regarding the literacy of those areas, but unfortunately, I couldn’t find any notable dataset. The option was to go for an analysis about the school attendance by young adults in those areas, with that I could check the fact that if students are not going to class, they could be more involved in criminal activities. The last part of the dataset research was to find significant data about the income. Counties are not used in Brazil, but neighborhoods, so the best way to determine the connection with crime was to use a map of the income by neighborhoods, with that action I could see if the most deprived areas are more affected by crime. A good point to be considered n this part of the research was to make it clear that not just because a certain region is poor and it has fewer students at the school, it will automatically be more inclined to crime. Also, it’s good to make it clear that the criminals can be committing a crime in other regions than the ones that they live.

The methodology of this research was simple. Once I had all my datasets, I realized that the best way to show all of this information was to use a map. Carto, then was my first option, I could easily cross information from different datasets, filter them and add analysis when needed. This part was critical because I had to obtain the right data when showing population and crime range, so I used the analysis feature to get to that solution. After the first round of production, I started my user experience research: My methodology on this part was to ask the users to say what they thought while they interacted with the study. I realized three users tests, and they pretty much have the same feedback. The main concern was about the colors and the usage of the map, they were really confused with the color red, in the beginning, they automatically associate it with the crime, and it was not my first intention; therefore I changed it. The second most crucial feedback was about the display of the income. Initially, the colors were reversed, giving a clue that the darkest areas were the most deprived areas, to solve this problem I also had to change the colors.

What I could find with this project is that areas which happen to have a low income and also have low attendance at school generally have 8% more crime rate than the other regions, but the interesting fact is that the areas next to those places have about 15% more. The conclusion that I can make is that young criminals are not committing a felony in their living area but around it. Another interesting finding is the fact that neighborhoods with a higher income also have a high crime scene but with less percentage of occasions. This brings attention to the fact that affluent areas are interesting for the criminals, but it happens with less frequency. Above all, one of the most exciting findings was the fact that some regions of Brazil, primarily the northeast which are one of the poorest regions of the country have an outstanding crime rate, even more than the capitals. This fact is associated with the overall situation of those areas, where all the three factors seem to contribute to the crime scene: The cities are miserable, and they have a massive amount of habitats with no literacy at all, that is precisely the recipe I was looking for this research.

Besides the fact that not all the data showed a clear pattern, I’m confident to say that this research was a success. The data showed us a coherent overview of the situation that strikes some Brazilian cities, and it gives us a right understanding that in this case the crime rate, most of the times ( in 3rd world countries ) can be associated directly with the wealth and literacy of the population. These findings can be used as an administrative tool to help the city planners to have a better understanding of the big picture and support the country to walk along a better path.