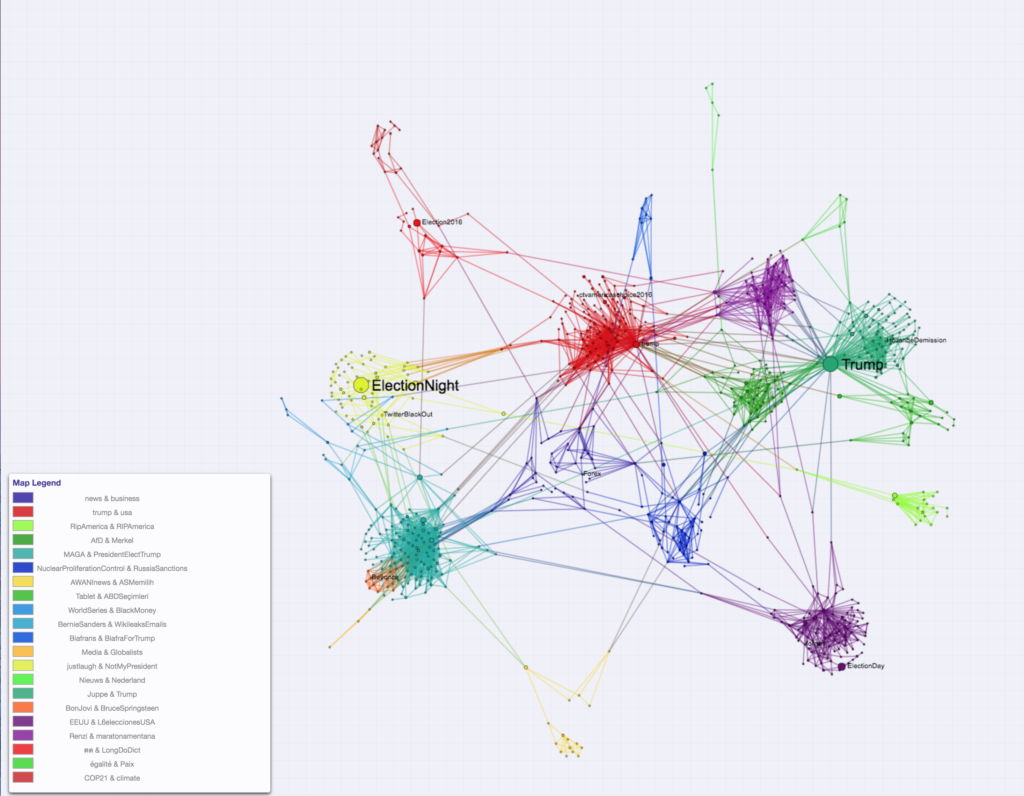 I was able to interpret data provided by studying information from the 2010 Census. The data presents a normalized list of the top 1000 shared surnames between six, general and world race groups as defined by the US census. By creating a network visualization the intention is to determine the strengths between races and popular surnames. Specifically, my intentions are to connect surnames across six race groups, and ultimately see the connections and note any strengths in number of occurrences.

I researched several network maps that cluster occurrences and sort them into specific groups.

Open Refine helps to consolidate the columns and information and spread them into rows so that software like Tableau and Gephi can read the data properly (in the order the the program can build structured maps and graphs).

Once the spreadsheet was cleaned up, the CSV file was taken into Gephi. The graphing software performs several functions that calculates the strength between primary nodes. In this case, the primary nodes are the six groups that are separated by common race groups.

Though there are origins associated with surnames, they are not contingent to one race. This network map shows surnames and their association to different groups of races as defined by the census. It is easy to understand that surnames are not exclusive to a specific race, but the map offers more insight into how surnames are shared between races. Broadly, surnames seemed to be shared across the six groups mostly with the Latinx and White communities. More specificaly, one can infer that Black, Multi-racial, and Latinx groups share a high count of surnames with White communities. The same can be said that the other race groups share a high count of surnames with Latinx communities.

I should break up the network map to show strengths between specific groups. This way more of the map is visible and the strength between the nodes is more prominent. For example, I can map and create a visualization of the strength of number of occurrences of a surname between Latinx and White, or between Black and White.

I should also note that this map can be supplemented with statistical information. In the future, I hope to culminate my data with the support of statistical graphs that can be created in Tableau. This will support the results with complementary data about the number of times each surname occurs in each race group. Tableau graphs are powerful in creating a separation between the categories of data, to see a clearer reference.