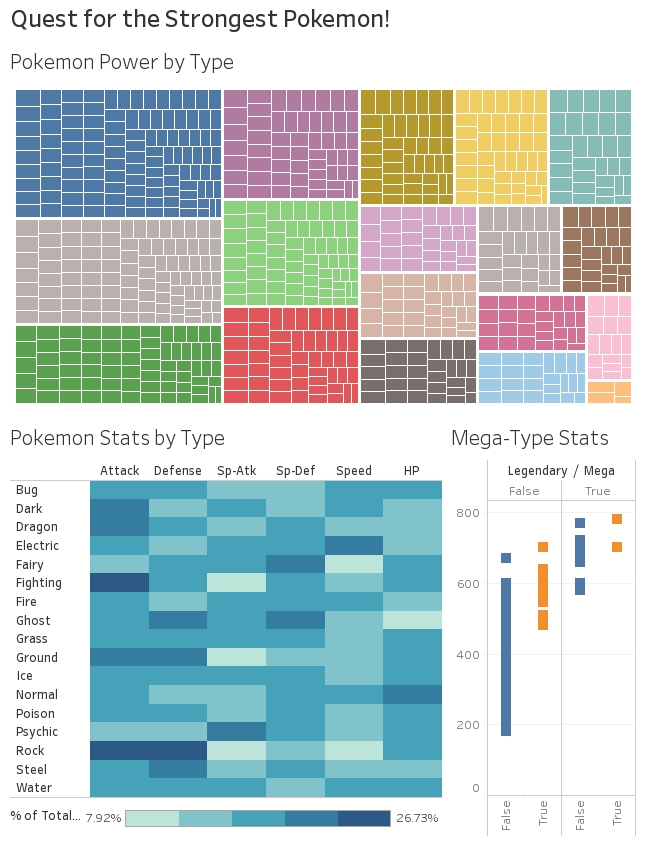 Quest for the Strongest Pokemon! Pokemon is a Japanese media franchise that features monster-characters known as “Pokemon” (pocket monsters) who battle each other for sport. The franchise includes cartoons, movies, card games, and an array of video games for multiple platforms, most famously Nintendo’s Gameboy. In these Gameboy games, players take on the role of “Pokemon Trainer” and adventure through Pokemon’s vast world on a quest to capture and train the strongest Pokemon teams. This Tableau Public dashboard features Pokemon stats for generations 1 through 6 (the first 719 of 807 current Pokemon) to assist players on their quest to build the most powerful Pokemon team.

This dashboard demonstrates three different views of Pokemon stats to help trainers design their teams. One of the most important components of Pokemon gameplay is type, where attacks become “super effective” or “not very effective” based on the Pokemon’s type. (For example, water is super effective against fire.)  “Pokemon Power by Type” answers one of the most commonly asked questions, “Which Pokemon is the most powerful in this type?” This table organizes Pokemon by their primary type and then sizes the squares according to their total stats, which is an indicator of how powerful the Pokemon is overall. The tooltip also includes the Pokemon’s secondary type, which can be useful when building teams to include more types than the team size would normally allow. The second table, “Pokemon Stats by Type,” shows the strengths and weaknesses of each Pokemon type, with dark blue representing strength. A trainer that wishes to create a team with the highest attack power will want to train Fighting, Rock, and possibly Psychic (for Special Attack), but they may find their team has low speed as a tradeoff. This table does not include Mega or Legendary Pokemon since they tend to be outliers and skew the overall impression of a type’s intended nature. Finally, “Mega-Type Stats” demonstrates the relationship between Mega Pokemon and their normal forms. The left half shows non-Legendary type Pokemon and the right half shows Legendary Pokemon (of which there is only one of each per game). This table demonstrates that Legendary Pokemon are almost always stronger than non-Legendary Pokemon, including their Mega forms, while Mega-Legendary Pokemon are only slightly better than their non-Mega forms. Understanding this helps place the “Pokemon Power by Type” into better context since Mega and Legendary status is included in the tooltip.

The data for this project came from data.world and appears to be based on the stats from Pokemon DB. I also personally added release date information for the Pokemon generations in hopes of finding a trend across game versions, but the answers weren’t as exciting as stat exploration by type. (The Pokemon Company seems to place a lot of effort into maintaining balance across releases, so most of the trend lines appeared pretty flat.) The data obtained from data.world needed to be formatted to better assess Pokemon stats, bringing the file to nearly 5000 records.

The desire to study the Pokemon Gameboy version came from my own experience (I’ve always wanted to know the answer to these questions) but this isn’t the only data set available for study. I found one study of Pokemon Go stats along with the underlying data. This table organizes Pokemon by their rarity and how difficult they are to catch, and also includes battle stats and type. Displaying Pokemon type by color is common, since most players have learned all 15 colors through gameplay. However, using 15 colors does have a tendency to create a jumbled-looking visualization, even if the colors are well-known and neatly organized. Pokemon has the added difficulty of similar-looking colors, such as Dragon and Water types seen on this chart. This visualization uses the same (or very similar) dataset as my project. The image is close to one of the first tables I created. While it’s interesting to see the broad clusters of Pokemon stats, I felt that this visualization was more useful for exploring outliers since they’re easier to see here, and studying outliers could be better served by a different display. A third visualization attempts to overcome the color and label clutter by instead showing the Pokemon sprites on a table with “Brawn over Brain” and “Overall Strength” axes. (Keep scrolling, it’s in the middle of the page.) The table made me laugh and it’s certainly memorable, but the overall usefulness is diminished when the sprites appear in clusters, as well as by the attempt to compress six stats into two dimensions. (The concept of “Brawn over Brain” and “Overall Strength” is not a gameplay concept.)

While I did get to explore several questions for my current dataset, most of my time was spent grooming errors in the data and learning Tableau. Given more time, I would like to find a more coherent way to display the power relationships for dual-type Pokemon. I would also love to explore the relationship between weakness and resistance for different Pokemon types and move sets. (I found the data for it but it would take a lot of cobbling together to make it work.) And other exciting avenues that I haven’t been able to explore at all (but found the data for!) involve Pokemon regions (different species appear at different times of day in different areas of the world map) as well as evolution and growth patterns. Oh, and egg family groups, Pokemon natures, special abilities, EV points, world trade patterns… *continues on and on and on*

The post Quest for the Strongest Pokemon! appeared first on Information Visualization.