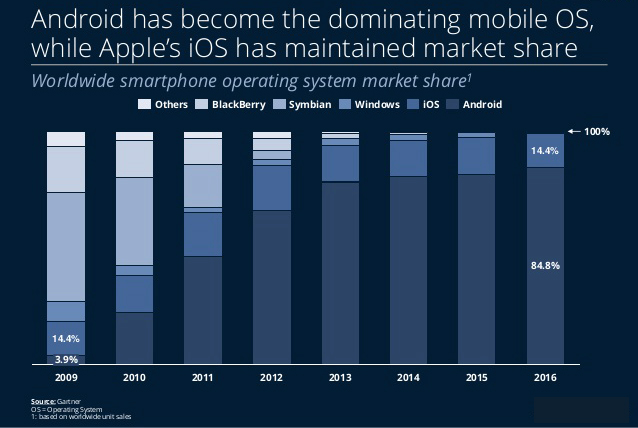 Smartphone and app seems to dominate people’s daily lives. Since I have some design experiences about electronic devices, I am very curious about the digital world of smartphone development in the recent decade. At the same time, social media, which change the way individuals and large organizations’ communicate, also made huge impact recent years. In America, a 2015 survey reported that 71% of teenagers have a Facebook account. Over 60% of 13 to 17 year old have at least one profile on social media, with many spending more than two hours a day on social networking sites. “If you make customers unhappy in the physical world, they might each tell 6 friends. If you make customers unhappy on the Internet, they can each tell 6,000 friends.” said Jeff Bezos, Founder and CEO of Amazon.

To research some data information chart or graph of the digital world, helps me understanding the worldwide market competition between tech companies such as Apple, Inc. The Chairman of Cisco System, John Chambers, once said “At least 40% of all businesses will die in the next 10 years…if they don’t figure out how to change their entire company to accommodate new technologies.” Before that, I thought people using Apple devices everywhere, so iOS should occupy a large percentage, but actually is not. As you can seen from the chart, android system has become the dominating mobile OS, in 2016, the percentage is 84.8% (Android) versus 14.4% (iOS). Material, including software and datasets used in the lab I didn’t find the data in recent years, just found the operating system usage dataset between the year 2008-2009. As you can seen from the final visualization, So at that time, Android and iOS market share were almost nearly the same. Back to the chart in recent year, the question would be, why Android system growing fast compared in 10 years ago?

Digital is inheriting the earth, and the generational shift is in full force as millennial and Gen X grows older and smartphones, computers, and tablets become the go-to options for media consumption. People in different country have different habit of using Smartphone and apps. It’s hard to say that which company or brand domain or lead the trend from a global perspective views. The rise of digital won’t just affect daily news, advertising and television will also face major disruption in the coming years: stream music, TV and video station are also changing, with the rapid swift of new technology.