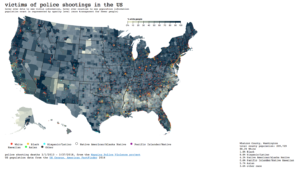 As per usual I had an idea for my final that was too big for me tackle with my current level of expertise, time limit, and nature of the time period. I initially wanted to relook at my Miami-Dade 311 data and look directly at issues that would pertain to hurricanes. A map of the Miami-Dade 311 data I was going to require data that pertained to hurricanes, specifically hurricanes that hit Miami-Dade. The most outstanding issue; was cleaning up that messy data! Then before mapping I would’ve worked to define and group the particular issues into categories that would make sense to a reader. After spending a few hours searching for clear hurricane data, though I settled on mapping something that was more in my scope. Therefore I settled on mapping Orlando Police Department (OPD) Crimes from 2015-2016. After running into software program limitations I settled on mapping three of the different types of crimes collected in the data. The crimes I choose to map were burglary, kidnapping, and homicide.

Once I analyzed the OPD Crime data, I used excel to filter out all the data that didn’t fall into the range of 2015-2016. I felt the map would tell a more effective story if I showed data that covered a smaller time frame. The Orlando crimes were categorized into 11 different Case Offense Categories, in which I created filters and made separate excel sheets for each type of offense. I did this with the original plan of mapping each of the offenses to my map using Carto.

Using Carto I knew that I’d be able change the color of each offense and I wanted my map to look something like the Jill Hubley map in which she mapped US police shootings, with each color representing the race of the deceased. My map doesn’t look at race, but it does plot types of incidents, and I wanted each type of incident to be clear.

Once in Carto, I learned that using the trial you are allowed only 7 layers. Knowing that I had 11 crimes to map, and needed to fit shape files somewhere, I had to slim down my data. I settled for mapping burglary, kidnapping, and homicide. I choose these three crimes because of Orlando’s association with Disney World. These crimes would be the most red flagged for a city whose reputation is a family safe environment. While any of the offenses documented could shed light on the true nature of Orlando, I felt like it would be interesting to visualize how much of these red flag offenses do take place in the city.

After seeing the results of the data and finding that more burglaries occurred in Orlando in 2015- 16 than homicide or kidnapping I created a supplementary map using Tableau. The map in Tableau looks directly at burglaries and in what types of locations they are occurring most in Orlando.

Once mapped I recruited 2 testers to test the first iteration of my map. To do so I sent an email with limited direction; aiming for them to explore the map and get back to me with commentary. The email sent stated:

Here is a link to the two maps. First I’d just like you to take a look at it and summarize to me what your initial thoughts are and what you think is being presented on the map. Once you begin to explore the map, I’d like another summarization of what you discovered about the maps data, and then finally give some feedback (such as where you might like to see information such as this). The second link is a supplementary visualization I created, I too believe you will understand that after you look at the interactive map.

3. Feedback and thoughts on future directions

The responses I received are as follows:

It was obvious (the legend) the 3 categories of Orlando crime data burglary, kidnapping & homicide were being indicated by red dots. My initial thought was, wow, that’s a lot of dots.

It was not intuitive that I was to select a defined are to populate the stats.

When I did select an area and saw the community name appear I quickly understood that I could now zoom into an area to get the stats. However I wish the area would be highlighted or possibly be outlined by a color rule (while viewing that area) and that the community name would stay visible.

I was disappointed the “more options” there were none. I was hoping to see dates/timeline data here.

I think this data/map would be very useful to Real Estate agents to share with home buyers. It is my guess that local police stations already have this type of area statistical data, however homeowner/neighborhood watch associations would benefit in the type of safety patrol implementation.

I thought the supplementary visual was “bright and graphic” however it was too general to provide any specific group valuable information. The breakdown of type of locations; i.e. hotel, park etc. in this visual could be shared in the “more option” section of the main map.

My initial thoughts are this is a map with crime statistics.  The different colors indicate where the murders are happening and so on.  The map actually names the different neighborhoods.  The neighborhoods appear to be in Orlando and not the entire Orange county area.

I feel this kind of information would be good for realtors.  People buying homes would get an idea of which neighborhoods they would like to raise they’re families.  This would also be good for Law enforcement so they would know what areas to focus on as far as preventing crime.

The Supplementary Visualization map is more focused on burglaries.  When interacting with the maps I can see more burglaries are taking place in apartments, with single family homes taking a close second. Again I feel this would be most helpful with law enforcement.  They could focus on the high crime areas.

While I felt the map was well received by my testers, after receiving feedback, I made some changes to the map so that certain points and information would be clearer. For instance, I changed the title from Orlando Crime Data to Some Orlando Crime Data From 2015-2016. Therefore users will immediately know the timeframe of the crimes and that these are not all the crimes happening in Orlando.

I then made the crimes with lesser occurrences (kidnapping and homicide) larger plots so they wouldn’t blend in. I redesigned this because from the user testing one of the users seemed to not be able to tell that the plots had different colors and thought all the plots were red. I chose the similar color choices because of the nature of the map. I wanted the points to stand out, and using a different color system I feel like would be less representative of point of crime.

I made the shape file of Orlando a sea green color. Though none of the participants asked about the color variations of this portion of the map, it too has significant value, and is a weighted representation of the burglary happening in particular counties in Orlando. I wanted to represent this because I felt that a user scanning the map, and only using the hover labels, would be able to point out the areas such as Parramore where burglaries seem to be very dense, or this system would entice them to look at areas where less burglary is happening all together.

On the first iteration of the map I included only a legend, and the smaller dots were seemingly not interactive. Making the plots larger I think entices users to click on the dots and thus bring up the information on a particular plot. Therefore I set each plot to show date, location, location type, and offense type. Also in the redesign I wanted made the header of each plots information the color that corresponds to the legend, widgets, and of course the plot color. For the supplementary visualization, I chose to use only one color, orange. I choose orange because it corresponded to the orange plots on the Carto map the represent burglary. Since this crime is represented most on the map, I felt individuals would want to know more about where burglaries were happening most. After making the additions to the map, I asked one on my pervious testers to relook at the map, and recruited a new tester who hadn’t seen the first map. I gave them both this set of direction:

The tester who I’d asked to relook at the map (Tester 1) said this about the second iteration of the map:

Wow! I really like the day/location/incident pop up….I can even use this data to research a particular crime further!!

Before there were just a bunch of dots, I had totally missed that they were color coded to illustrate each category.

There’s a lot of murder in Orlando.

While I guess in this case you could say less is more. Using a different group/ type of testers I probably would’ve gotten different feedback. There were my findings though:

Users are looking to learn from map

This map would be useful for law enforcement or reality

Using larger plots on my map immediately helped my testers realize what the plots were and that they’re interactive. Along with providing a little instruction, my second iteration was easier translated to users, and they found that interacting with the map was satisfying.

Though the color scale is one that is not recommended for design, I feel like because of the nature of the map, and also where a map like this might be useful, the colors are reflective of the crimes and thus are represented like red flags and important issues versus something less serious.

All of my users immediately identified what the learning goal of the map was; and this I feel is a very important aspect of the map. The recommendations made by my testers were suggestions that could create more opportunities to learn from the map. I think this map is a great start for industries my users suggested; such as individuals interested in looking for a home, and law enforcement. At this point I feel like mapping all the offense types on the map might be overwhelming though a map in which you could toggle between offenses plotted could be a great direction for this data.

Supplementary Map of Burglaries in Orlando from 2015-2016