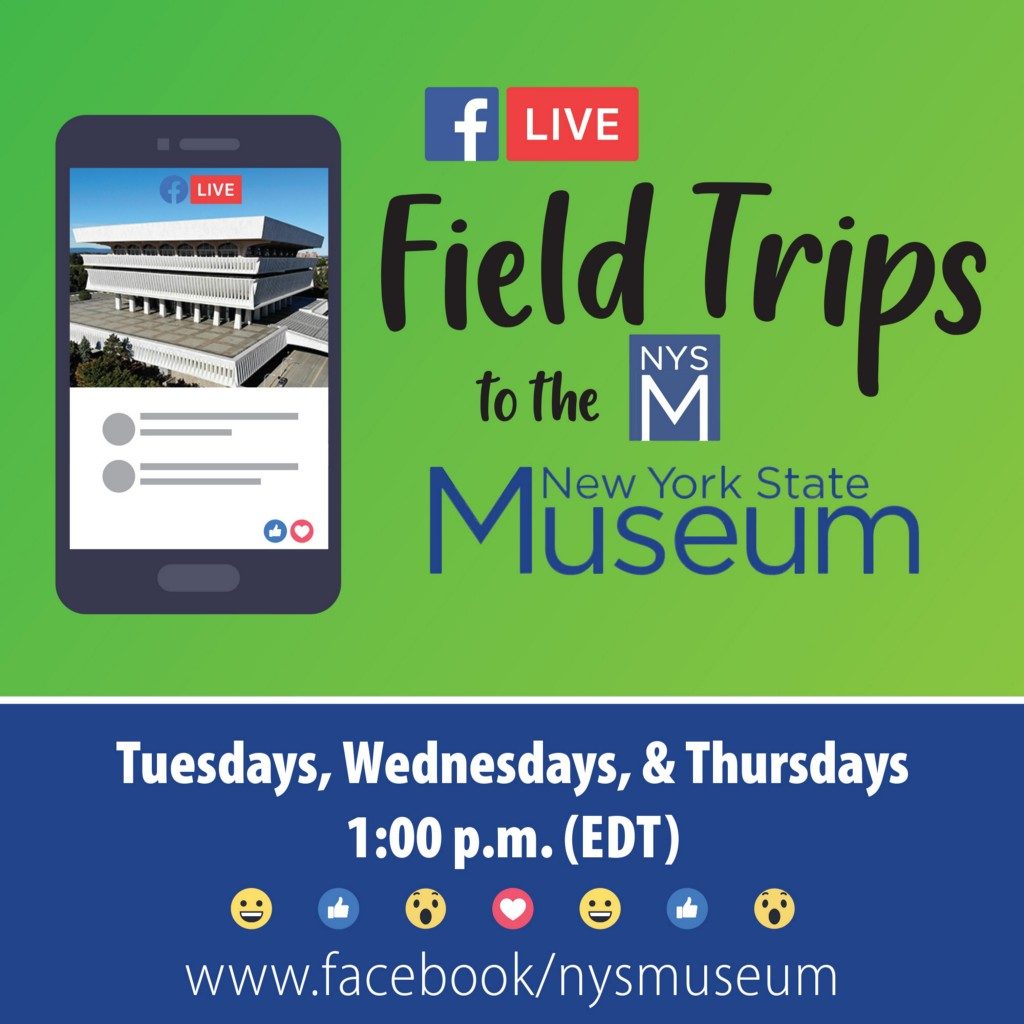 The NYS Museum is Going Live

Museums may be closed across the United States, and many around the world, but that doesn’t have to mean visitors can no longer experience museums. Institutions who are lucky enough to already have virtual tours, such as those on google arts project, are promoting those tours now. Those with online collections are recommending virtual tours this way. Artists, entertainers, and museums alike are creating more content for our quarantined and “social distancing” brains to gobble up. Virtual tours, instagram’s #Museumfromhome, and even artist’s talks and curator lectures are being spread through many museum’s social media accounts and websites. At the New York State Museum, they are offering several of the above mentioned.

Located in Albany, The New York State Museum is known for its 100-year-old indoor carousel, as well as its exhibitions on the cultural history of New York State. The Museum was closed on March 13th, after Governor Cuomo banned gatherings of over 500 people. The Museum’s Twitter @nysmuseum said nothing about the closure, but the website has a border beneath the navigation tools stating “The State Museum, State Library, and State Archives are temporarily Closed”

The Museum’s Facebook page posted on March 23rd, linking their online resources for educators and on March 26th, encouraged students, caregivers, and educators, to explore their online collections. The Museum website currently has 15 online exhibitions that feature photographs of artifacts, biographies, and interactive digital displays of things like timelines and a graphic describing the Cohoes Mastodon’s height and weight. Some of these online exhibitions are formatted for scrolling, new information popping up as the viewer explores the page, and some seem to be their own website of sorts. Within one of their online exhibitions for the “Family Room at One Liberty Plaza” you can take a virtual tour of the room.

On March 31st the Museum announced on all three platforms that they would be live-streaming a “field trip” to the NYS Museum every Tuesday, Wednesday, and Thursday on Facebook. These live events are hosted by the museum’s own educators, historians, and scientists and seem to last around 20 minutes. The hosts take you into exhibits and even behind the scenes in the museum and tell you facts about New York State and the exhibits, and answer a few questions that can be sent to them live.

The difference between what the NYS museum is doing and what other museums have begun to do lies mainly in the audience. While the Facebook live “Field Trips” were interesting to me, as a museum and history lover, they mainly cater to the younger crowd. This medium is great for those parents who now have to teach their children from home. Three days a week, children worldwide can watch from home, see the NYS Museum, and even get to ask questions!

There can be a give and take for content as museums move from platform to platform but NYS Museum is doing its best to offer a myriad of content. The virtual tours and online exhibitions are designed to move at your own pace, decide what you learn and where you go. The Facebook live events are for those who like a little more structure, to learn from specialists, and still ask a question or two. The schedule the Museum offers is also paramount, always at 1 PM EST, three days a week, it creates a routine for those who have to stay home from school. Letting Facebook followers know in advance what topics will be covered lets home educators work the event into their lesson plan. For example, yesterday I tuned in for Adirondack animals. Not only did I get to see taxidermy animals that come from where I grew up, I learned that most bears don’t like honey; they actually attack bees nests for the bee larvae.

While this time can be frustrating and worrying, there can be confidence in the things that will go unchanged, and a reliance on a daily routine. Since the NYS Museum is government-funded we know there is a very good chance it will open again when things return to normal. They may have closed for the time being, but one day we will be able to ride the carousel again! In the meantime, the NYS Museum, like many others, is here for us virtually. Whether it be via a virtual tour, online collections, videos, or Facebook live events 3 days a week.

The NYS Museum is Going Live was originally published in Museums and Digital Culture – Pratt Institute on Medium, where people are continuing the conversation by highlighting and responding to this story.