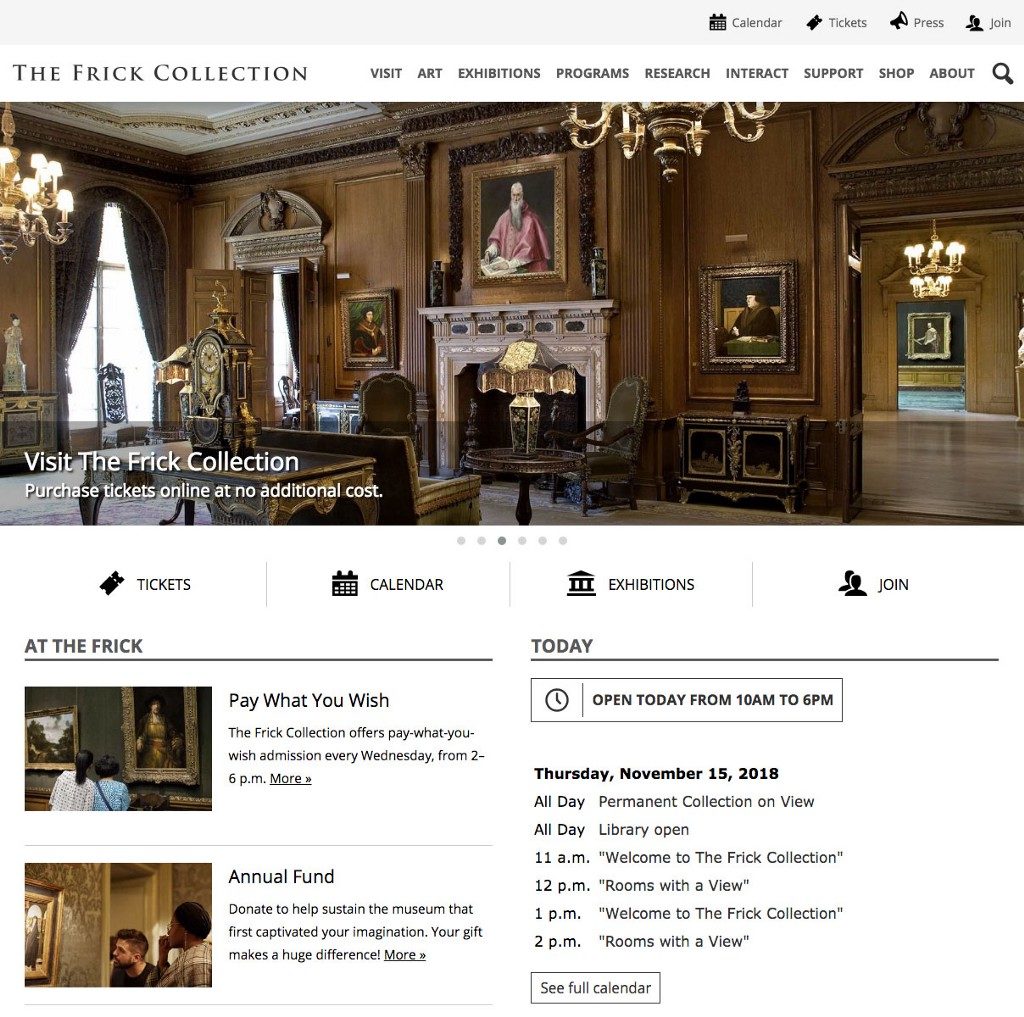 Housed in the historic Fifth Avenue residence of industrialist Henry Clay Frick, The Frick Collection showcases work by European artists, especially Old Master paintings. The associated Frick Art Reference Library serves as one of the premier institutions for art historical research in Western art traditions. The mission of the Frick is not only to collect, preserve and showcase both their works of art as well as the Gilded Age mansion in which they are housed, but also to “to provide access, understanding, and enjoyment of the Collection to the public.” The museum’s web presence has been an integral part of furthering that mission of making the Collection accessible to a wider public.

Valery Chen has been working at The Frick Collection for over ten years and is currently the museum’s Front-End Web Developer, responsible for maintaining the Frick’s websites. She holds a masters degree in Library Science from Queens College, where she first learned the basics of web development. She started at the Frick Art Reference Library as a Page Technician, moving on to a position as a Conservation Assistant, before becoming the museum’s Web Assistant. It was at this point that the Frick was beginning to migrate their web pages from Dreamweaver to Drupal 7, and she was responsible for assisting with the site migration, sub-theming the Drupal site, updating and maintaining content as well as system requirements. She was kind enough to agree to an interview about her work in web development, as well as the role digital initiatives play within the Frick as an institution.

Digital at the Frick

The digital department has trained approximately fifty employees over time to produce content for the various pages of the website and blogs run by the Frick. However, to account for the increasing complexity of the system, as well as to minimize the burden of producing web content on top of their traditional workloads, there is also a dedicated Web Content Strategist to oversee and carry out data entry as necessary.

While the Frick does not have an official and distinct “digital strategy”, Ms. Chen sees the digital department as being integral to the museum’s broader strategic goals and has found the institution to be extremely supportive of digital initiatives, particularly the increased access and visibility of the Collection on the museum website.

The museum website serves as an important platform for providing information about the history of the Collection, the Frick mansion, and the institution itself. Every item in the Collection is represented on the website, with information from the collections database provided directly to users. The site also provides information about all of the temporary exhibitions held at the Frick, going back to the 1930s. Recent exhibitions are also represented with virtual tours hosted on the site, which helps provide an institutional record for how the space has changed over time. The majority of public lectures that are held on site are also live-streamed, recorded, and made available indefinitely on the website as videos. Additionally, the digital department has partnered with Google Arts & Culture to bring this content to an additional platform, increasing the visibility of the Collection for audiences who may not be reached by the main Frick website.

Ms. Chen noted that, as far as the website is concerned, in the recent years, there has been a focus on becoming ADA compliant, and it continues to be an ongoing priority as technology evolves and changes. Some of those initiatives include providing closed captioning for videos, uploading transcripts for audio content in six languages, as well as creating image alt text for those accessing the site using an e-reader.

These features allow the Collection, as well as the physical landmark of the Frick mansion, to be made accessible to an international audience, enabling those who may not be able to make a trip to the museum to experience the artwork in its physical context as much as possible. This speaks as well to the department’s goals for the web audience — rather than focusing on specifically targeted segments, the emphasis is on providing a digital experience that is immersive and open to anyone who is interested in the art that is represented in the Collection.

The digital department has also begun to focus on their web metrics with Google Analytics, to further meet the needs of their various audiences. Of particular interest is studying how the digitized collection is being accessed in-gallery versus out of gallery. This is especially relevant at the Frick as there is no wall text in the permanent collection galleries — in keeping with preserving the ambiance of Mr. Frick’s residence as a home — leaving the mobile website and The Frick Collection App to provide information about the works on display. In keeping with their goal for the website, the success of the site is measured in the number of visitors and rates of traffic to the site, particularly when a given exhibition generates a spike in visits.

Room for Growth & Opportunities for the Future

As technology continues to grow and develop, Ms. Chen stated that the general goal for the future of the Frick’s web presence was to continue offering their content in a way that is as interactive and engaging as possible. She identified four areas that she would like to focus on in the near-term:

– Virtual Reality — building on the virtual tours already available via the website, the next step would be to create completely immersive experiences for website users who cannot visit the museum in person.

– Increased API integration to get more of their workflow automated and integrated as systems get more complex, such as creating an API for Drupal that communicates with the collection database so that information is updated seamlessly.

– Upgrading the current Drupal 7 website to Drupal 8, which would allow for much greater flexibility in how content is published. It also has much greater built-in functionality for meeting accessibility standards.

– Adoption of the International Image Interoperability Framework (IIIF), which is a shared collection of APIs that links image repositories from contributing institutions in a user-friendly interface for side-by-side comparisons, annotations, and citations. Ms. Chen pointed out that IIIF is an amazing tool for art historical research, which is another major component of the Frick’s mission statement. It would also allow for easier data integration between the institution’s DAM and other digital image repositories.

Old Masters Online — Web Development at The Frick was originally published in Museums and Digital Culture – Pratt Institute on Medium, where people are continuing the conversation by highlighting and responding to this story.