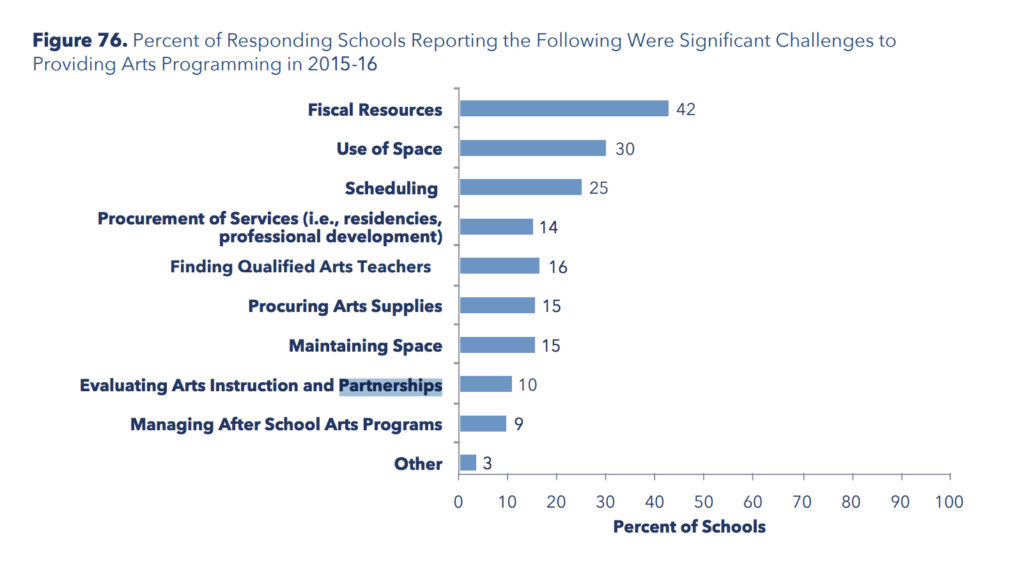 New York City public school arts education, though stretched thin (fig. 1), lead the country in providing diverse and robust arts programming for public school students. By and large, even NYC schools employ only one certified arts educator per public school, who may or may not be full-time — and public schools in other areas of the country trail behind. Partnerships between cultural arts organizations local to schools and their larger communities are crucial to providing access to the greatest possible quality of arts education.1 However, education departments in such organizations and institutions usually suffer disproportionately from limited budgets.

In America’s current culture war, federal funding for the humanities is tenuous. It is imperative for American arts organizations to identify potential sources for additional support, and once identified, to develop targeted fundraising efforts intelligently and responsibly.

New York City’s rich and well-documented history with nonprofit arts provides several references from which to draw guidance for research scope and direction. Historically, the survival of the City’s arts organizations has relied more heavily on private donations than governmental funding (fig. 2).2

This project examines the value and relationship quality between the arts and Americans in the context of funding, but on a national scale. It is the first of several exploratory projects that, collectively, aim to provide useful and relevant information for the development of actionable, human-centered approaches to supporting arts education.

I initially chose to use a timeline to find trends or constants in the perceptions of the arts and arts funding. Based on the given dataset, I limited the scope, in this case, to art museums in America.To identify or rule out cultural attitude shifts over generations.

Data points and normalization
Using the provided codebook, I narrowed the data points to a manageable selection of relevant factors — three out of up to over 200 possible data points, depending on the year. The chosen data points were selected for their relation to art museums and their presence across a broad range of survey years. While the dataset provides survey information from 1973 to 1992, 1973’s survey lacked data for the factors explored and respondent ages were inconsistent with the other years, so 1973 was not taken into account in this project.

The question of whether a participant was willing to pay more taxes for the arts was posed differently in different years, and several times as a set of questions relating to how much they might be willing to pay in descending amounts. A negative participant response to the greatest amount, for example, would result in the followup question of whether they would be willing to pay less than the first amount, and so on. Positive responses resulted in moving on to a different set of questions and result in null values for followup questions in the dataset. To normalize this information, I reduced the number of survey responses into a binary group —  if the respondents were willing to pay more taxes to the support the arts, or if they were not. Doing so required counting their responses by code and aggregating them with a count in Google Sheets, taking into account null values so as not to distort the number of respondents. E.g.:

A similar process was used to reduce multiple possible responses to other questions posed into a binary values. The calculated data points below were then placed into new workbooks, one for each year (1975, 1980, 1984, 1987 and 1992), and exported as CSV files for use in Tableau.

The results indicate a strong positive relationship between whether Americans value the arts and if they were willing to pay more taxes to support them. Perceptions of how art museums are largely supported — by their own means or by federal support / individual contributions — consistently reflect that most people do not perceive art museums to be self-supporting.

An exceptional outlier in the case of perception of art museum funding appears in 1980, a year in which “the arts served as a canary in the coalmine for the devastation of federal funding for social services” at the hands of the Reagan administration.4

This perception was certainly accurate and timely, however, the previous belief that art museums are not primarily self-supporting quickly returned. The arts have since been primarily funded through individual donations, which does not contradict the beliefs in these findings — however, a more relevant question raised is whether the American public is aware of the failure of public funding of the arts to recover since 1980.5