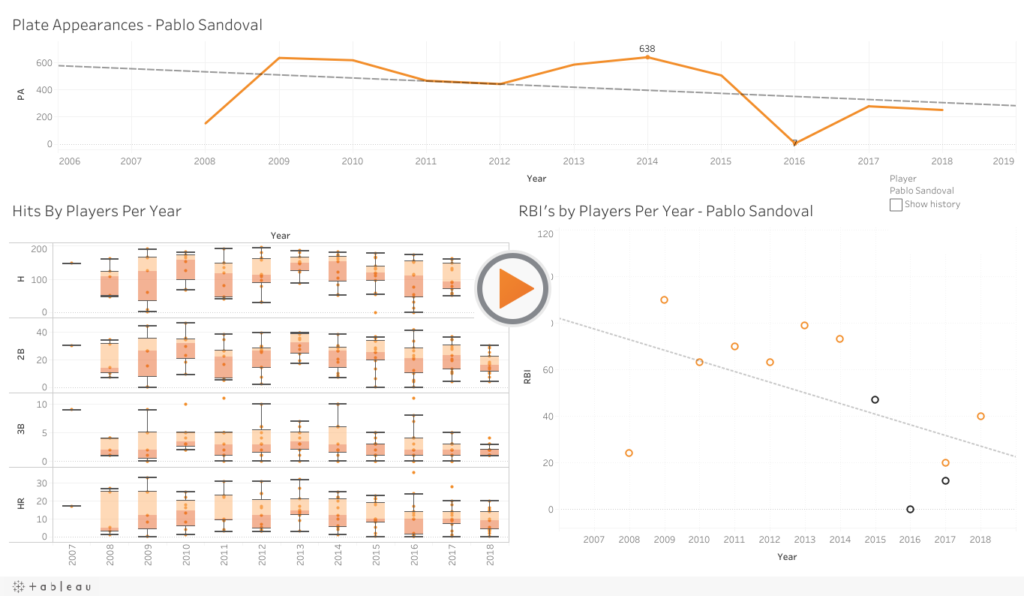 The Fall Of Giants – Batting of the 2018 Giants In baseball, the goal is to be the best, as it is with most sports.  However very few teams ever make it to the World Series, or even the Post Season.  So it is impressive that a team could win 3 World Series in the course of just 5 years.  However other than one post season shot in 2015, the San Francisco Giants have sunk down to the bottom of the rankings and have not seen a post season in the past 3 years despite having many of the same players as the 2014 World Series.

In this document I plan on taking a look at the batting of the current San Francisco Giants to determine how a team who was so strong only a few years ago has managed to slump down to the bottom of the pack.  This study will use the 2018 opening day roster as the selection of players and analyze both their performance this year as well as their performance in previous years in order to see how far they have come or where they are going based on the trends of their batting over the years.  This study will only focus on the position players and not the pitchers as they only bat one every five days at most.

The idea for this study is largely based around this graph that I came across while looking for statistics on the players.  This graph shows how far the margin of win is for each game of the 2018 season.  It shows how they started off strong having both dramatic wins and losses but as the season progressed the green started to diminish and there seemed to be a lot more red drops than green and longer periods of red dominance. This seemed strange that players, like Buster Posey shown above could be compared to Hall of Fame players but lately have been playing so awfully.  Since the first graph set showed how many losses there were by amount I started to focus more of on the batting of the team.

To create this study, I first had to gather the data I needed and narrow down my parameters to the easiest form leading me to the Opening Day roster for 2018.  From there I knew I wanted to examine the batting of this team to better see how they have changed over the year.  I had been hoping to maybe see Veteran players being able to see the ball better and hopefully having more productive hits.  I figure the best way to examine their hits were the following: As can be seen with the following chart you can see that while some areas have stayed steady, such as the amount of triples (third base hits) or are constantly fluctuating such as the number of doubles (second base hits) over all the number if hits and home runs are both decreasing as a whole.  Obviously this causes an issues because while defense is a important in the sport, if it isn’t being backed up by hits it remains useless. While many of the players on this team have stayed the same over the past few years, as time has gone on their bats have not been adding up to what they had once been before.  This team, which was once full of champions, has fallen into a slump with weak bats.  This is starting to be seen in the fact that many of the players that had previously been getting around 600 bats a year have been getting significantly less as time in the past few years.  However, where on many teams the newer players will provide fresh new bats many of our Rookie players have fallen flat as well.

The post The Fall Of Giants – Batting of the 2018 Giants appeared first on Information Visualization.