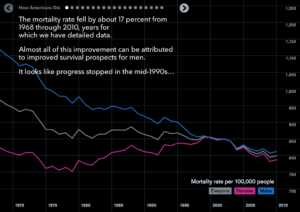 NYC Leading Cause of Death

Health is a very important factor to people’s lives regardless where you live. The causes can be very broad, and NYC is not an exception when it comes to people trying to live a healthy life. Living in NYC is very hectic because of the busy environment. We hear a lot of ambulances everywhere in the city and wherever we go. It has gotten to a point where noise pollution is an issue.
Some of the questions I wanted ask were:

By using the dataset that was found, I will be utilizing Tableau Public to visualize and analyze the data about leading causes of death in NYC. There are so many different causes of death but only three causes were very high: Disease of Heart, Malignant Neoplasms (cancer) and all other causes. Just by looking at this line graph, I could clearly tell that the cause of highest death rate is the Disease of Heart. The remaining causes seem a lot less compared to the top three. This line graph answered the questions I was trying to answer: What is the leading cause of death in NYC? And What other causes of death exist in NYC? This is a heatmap that I created by each cause of death. I displayed it to show the gradual difference by each year. The white spaces tells me that there are no data in those particular years, or it could be that there were no deaths reported during those years which would be very odd. Most of the causes are fairly light, towards the lower side of the death rate. However the really dark blue parts of the heatmap represents the high death rate of those causes. I created this bar graph to show the number of deaths by each race each year. I also decided to add a legend on the right corner to see the difference between the female and male death rates as well. It didn’t seem like there was much difference in genders when it came to the number of deaths because it’s half and half. But clearly White Non-Hispanic people have the highest number of deaths each year compared to the other races. A reason why this might be happening could be due the population of the race as a whole in NYC. It’s clear that there would be more white non-hispanic people living in this big city compared to other races. But it was still interesting to visually see the comparison of the number of deaths in NYC by race.

Overall, using Tableau Public was an interesting experience. I always used to wonder how visual representation of data were made. Especially with numbers because I thought graphs were usually made on excel spreadsheets. This was a new experience for me. Looking for the dataset wasn’t as difficult as I thought it would be, but I wish there were more years of data on this topic. If given more time, I think I would have also thought of looking for data on each borough and analyzing data there as well. Cleaning the dataset overall was not too complicated since my dataset was relatively clean. While performing the visualization of my data, I found Tableau Public a bit challenging to use. I had to ask for help in the beginning because I didn’t know how and where to add the values. I had to do some exploring of the tool before I was comfortable creating the visualizations I desired.

If I were to expand on this project, I would look for more data about if the death rate is affected by how wealthy a person is or information about each boroughs. I think that would be another interesting approach of this dataset. Combining datasets can be very complicated but I think this can create really complex and interesting data visualizations.

The post NYC Leading Cause of Death appeared first on Information Visualization.