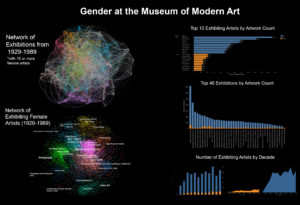 In building on my earlier Tableau project, and drawing on my work in Gephi, I decided to delve deeper into the MoMA dataset and concentrate on gender representations in exhibitions held between 1929-1989. The Museum opened in 1929 and its first exhibition—Cézanne, Gauguin, Seurat, van Gogh—occurred in November of that year. According to the dataset, Georgia O’Keeffe was the first female artist to exhibit at the museum and was part of the exhibition titled Paintings by 19 Living Artists; she was the sole female among 18 males. This ratio of men to women (between 4% and 5%) was more or less the trend for the first decade of the museum’s operation. There were slight increases in this percentage around the 1940s, possibly the result of the popularity of female photographers such as Berenice Abbott and Helen Levitt. Similar increases in the percentage of females exhibiting at MoMA after 1970 may be attributable to an increased recognition of female artists, especially those working from a feminist perspective. This period, which coincides with the height of Second Wave Feminism, evidences the highest percentage of women, which reaches over 12%. Certainly, the total number of women artists exhibiting at MoMA rose in the period from 1929 to 1989. When put into context as a percentage of total artists exhibiting, however, the number of women is consistently dwarfed by the number of men represented in shows. The one exception to this was the exclusively female exhibition of 1975 titled Extraordinary Women. Even then, the modest size of this show (15 total artists) makes it virtually invisible in the larger pool of data. My visualizations focus on such (dis)proportions by drawing attention to the distribution of male and female artists in the Museum’s exhibitions across time. I try to redress this disparity by highlighting the female network discernible below the surface of the male-dominated field of Modern Art. The most immediate finding in my visualization is the low percentage of female artists exhibiting in the first six decades of the Museum’s existence. In taking a look the top 10 exhibiting artists, for example, we find Pablo Picasso appearing in the records almost 300 times. In contrast, Berenice Abbott and Georgia O’Keeffe each occur only 41 times (i.e. 86% less frequently than Picasso). This pattern repeats itself more broadly for all male artists in the collection. For all exhibitions at MoMA over the span from1928 to 1989, the data show that males consistently exhibit a much higher percentage than their female counterparts. Even in my network visualization of exhibitions with fifteen or more women contributing, it is difficult to isolate the women among all the nodes. As a result, I made a network solely on women exhibiters and have labeled some of the major artists, medium, and specific exhibition when discernible. Overall, I think my final visualizations are successful. Although fortunate to have a laptop, I discovered that my computer did not have the available memory required to handle rendering network data for all MoMA exhibitions in Gephi (I tried J). Fortunately, I was able to use the computers in the Machinery Building Lab at Pratt – Brooklyn. The Lab manager was amenable to putting the software we use in class on one of the computers and let me work for a few days. The network visualizations, as well as the final presentation, were possible thanks to these resources. To continue working with visualization programs, the lab manager told me that I could use this computer for the rest of the summer. In turn, I would like to take my visualization in a different direction design wise and change one of the Tableau bar graphs into a different kind of statistical visualization (e.g. a whisker and box plot). I also want to re-design the layout in Illustrator using colors and design elements typical of Modern Art, specifically those used by female artists in my network visualization or, perhaps, the greys, blacks, and reds used by feminist artist Barbara Kruger.

The post Gender at MoMA appeared first on Information Visualization.